Denver is beautiful with its conglomeration of modern and rustic architecture, tree-lined sidewalks, and vibrantly unique artwork. According to a new Thrillist ranking, it’s also home to one of the 10 most beautiful neighborhoods in America. 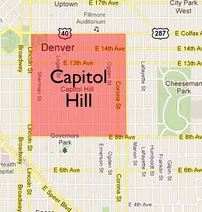 Thrillist points to the classic mansions found in Capitol Hill as one big reason why it made it into their ranking.

“Following the construction of the State Capitol Building in the 1870s, many of Denver’s wealthiest citizens decided to set up an opulent enclave of mansions in the surrounding neighborhood, building their own Millionaire’s Row.”

While may of those mansions were torn down following the Great Depression, “others, like the Capitol Hill Mansion Bed & Breakfast and the Molly Brown Museum, have found second lives in the years that followed.”

Many Capitol Hill areas are also being redeveloped to become more pedestrian-friendly. Thrillist points to Poet’s Row, a “slew of Art Deco-styled apartment houses that bear the names of famous literary figures, from Mark Twain to Emily Dickinson,” as representing the beauty in the neighborhood.