Spring is the time of year when new college graduates set their sights on jobs across the country and, for many, life in an entirely new city. Around the same time, recent grads who signed and re-signed leases the previous year weigh the pros and cons of staying put versus moving to a new city or neighborhood for better pay, cheaper rent, and a host of other factors.

Where does Colorado fall in this where-to-live decision-making process?

Forbes recently put out a report citing data from niche.com stating that there aren’t many cities in the United States considered to be a better place for Millennials than Denver.

Denver ranked No. 7 on the list of 25 cities, after New York, Austin, Washington, Chicago, San Francisco and Boston. To create this ranking of the 25 Best Cities and Neighborhoods for Millennials, Niche.com analyzed the data of cities and metro areas with one million residents or more than the U.S. Census, FBI, and surveys of nearly half a million college students and graduated from over the past four years. Factors examined included percentage of the population identified as Millennials (ages 25 to 34), median income, education level, and racial diversity.

Even more encouraging, as far as work goes, if you’re a recent graduate looking for a job on this side of the Rocky Mountains, you’re looking in the right place. Denver ranks third for least competitive cities for new grad jobs, according to recent Simply Hired data. In other words, finding a job in Denver is easier than the average city. 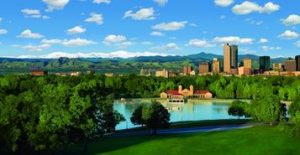