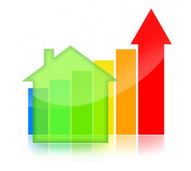 Competition in the market has driven prices up. According to the latest data from REcolorado, the average sales price for a single-family detached home in metro Denver climbed to $402,302 in April.

Including attached condominiums and townhomes, the average sales price of a home in metro Denver was $361,953 in April.

Condos and townhomes alone had an average sales price of $256,589 in April, which is 13 percent higher than last year.

In the metro area, homes were on the market for an average of 24 days in April, compared with a national average of 89 days.

The number of active listings (homes for sale that do not yet have any purchase offers) reached 6,149 in April, which is 19 percent higher from the month before, but 15 percent lower from April 2014.

CoreLogic recently released its monthly report on home price appreciation, and according to the report, Denver’s Home Price Index increased by 10.9 percent year-over-year in March.

Colorado’s index increased by 9.2 percent, the highest rate of home-price appreciation in the country.

Nationally, the average home-price appreciation year-over-year in March was 5.9 percent.

As you can see, all signs are pointing toward continued price appreciation throughout 2015.

Be sure to follow us on Twitter, where we Tweet on all kinds of real estate related matters and Denver news trends. We look forward to serving you for all your real estate needs.