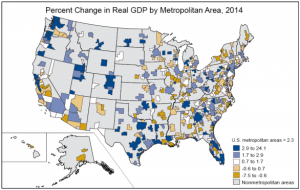 According to a new report by the federal Bureau of Economic Analysis, Denver’s economy grew at a pace of 6.5 percent last year, which is nearly triple the average rate of the nation’s metro areas.

The Denver metro area (including Aurora and Lakewood) had a gross domestic product (GDP), which measures the total output of goods and services in a given area, of $187.1 billion in 2014,

which ranked Denver 18th for year­over­year growth out of 381 metropolitan areas ranked in the analysis.

At 6.5 percent, the growth in the GDP for metro Denver during 2014 is significantly higher than the GDP for U.S. metro areas, which was at 2.3 percent in 2014. Click here to see the full report.

Check out Alaris Properties, LLC, where we take the worry out of buying and selling real estate, and make the entire experience enjoyable.

(Image via the Bureau of Economic Analysis)