Ryan McMaken, an economist for the Colorado Division of Housing, recently stated that “Foreclosure activity is quickly moving toward what we consider to be a ‘normal’ rate”.

Housing experts point to the improving economy and rising home prices, making homeowners less willing to walk away from their mortgages, as factors in falling foreclosure rates. Month to month, foreclosure filings dropped 6.7% between September and October 2013.

These numbers cover 12 urban counties of the state, including all of the Denver metro area plus, Boulder, Colorado Springs, Fort Collins, Grand Junction, Greeley and Pueblo. Most Colorado foreclosure activity happens in those counties.

In Denver County alone, October’s foreclosure filings totaled 98, down 55.3% from a year earlier, and sales were down 82.8%.

Alaris may be able to help you avoid foreclosure. We wish you peace and joy this holiday season. 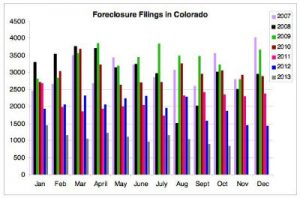