The last section of track has been laid in place on the East rail line between DIA and Denver Union Station, which is the first segment of the Eagle project, and is expected to open for passenger traffic in the second quarter of 2016.

Interested in Transit Oriented Development and other environmentally sustainable initiatives? Check out our Tumblr. 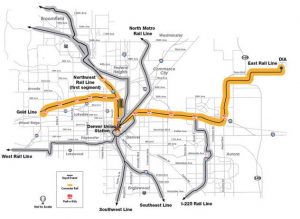