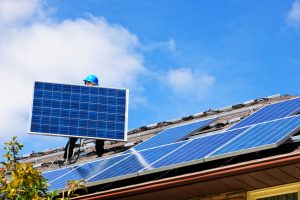 According to a new study by GTM (Greentech Media) Research, thousands of solar power panels were installed on home rooftops in 2014, but very few of them were owned by the homeowners.

About 72 percent of the 1.2 gigawatts worth of solar power panels installed on residential rooftops were owned by third parties, with homeowners paying for the panels or the power generated by the systems via leases or power-purchase agreements.

The remaining systems were owned by the homeowner who typically used loans to pay for the systems up front.

In fact, the residential market in the U.S. has grown in 15 of the last 16 quarters, largely due to third-party financing arrangements such as leases.

With third-parties picking up the tab for installing the systems, homeowners pay for the systems via a multi-year contract that’s a lease on the system itself or a power purchase agreement to buy the power the systems generate.

GTM Research also believes though that direct ownership of solar power panels by homeowners is rising, and will account for 54 percent of the anticipated 5.2 gigawatt residential solar power market in 2020. We believe this is the wave of the future. Use of alternative energy is on the rise and will likely impact the future sale of homes a great deal.

If you have any questions or would like to see more blogs about specific subject matters, click here to contact us. We really listen and look forward to assisting you with your next real estate transaction.