The Transformation of Denver’s Transportation 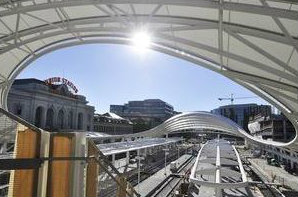 Regional Transportation District’s (RTD) sprawling FasTracks project, which includes laying more than 100 miles of rail tracks throughout metro Denver, and transforming the old station into a transportation hub, will begin construction of the North Metro commuter rail line in the spring of 2014.

This line will carry passengers from Denver Union Station to 124th Avenue, and as more funds become available, the length of the FasTracks line will be extended further north.

Here is the progress the FasTracks project has already made in the past year.

(1) The transformation of the transportation side of Denver Union Station in Lower Downtown – the ground-level and underground terminals for buses and rail – are 95% complete; and,

(2) The tracks are laid for commuter lines extending to Denver International Airport, Arvada and Westminster. The 980-foot-long bus terminal, built 25 feet underground and with room for 22 buses to drop off and pick up passengers simultaneously, is finished.

Look forward to the station celebrating its opening on May 9, 2014. The area that currently has about 15,000 people come through via RTD’s existing light-rail tracks on the west side of the station and the agency’s 16th Street Mall shuttle will start to grow. RTD expects more than 200,000 people to use the station daily by 2030.

Each new rail line is a catalyst for Transit-Oriented Development (TOD) in metro Denver, and the impact the rail expansion will have on the entire metropolitan area is significant. Less traffic congestion and more commuting options will improve the region’s quality of life and make Denver that much more attractive to current and potential businesses and residents. 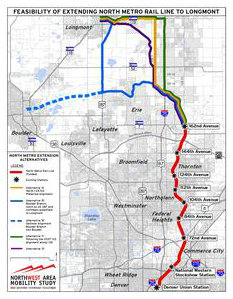